The new Sustainable Development Goals (SDGs) will be announced roughly 200 days from now at the UN General Assembly in September 2015. These new goals will replace the current 8 Millennium Development Goals (MDGs). While governments debate how best to define this broad UN agenda, there are diplomats “who want to trim the long list of targets and NGO advocates determined to preserve it,” wrote Stewart M. Patrick for the Council on Foreign Relations.

My previous blog post on SDG Goal 2 highlighted proposals by the UN’s Food and Agriculture Organization (FAO) as well as its 3 Rome-based agencies (FAO, WFP, and IFAD). This time I take a look at the Copenhagen Consensus Center and its research on nutrition and food security.

The Copenhagen Consensus Center is a think tank that bases its prioritization of global development solutions on data and cost-benefit analysis. As its president and founder Bjorn Lomborg is quick to point out in Foreign Affairs, “Of course, economics alone should not determine the world’s top development aims over the next decade and a half. But ignoring costs doesn’t make difficult choices disappear; it makes them less clear.”

With 169 targets in the current iteration of the SDGs, it is critical to determine which ones will have the greatest global impact in 2016-2030. This is no small task, which the Economist notes in its recent article “The Economics of Optimism.” 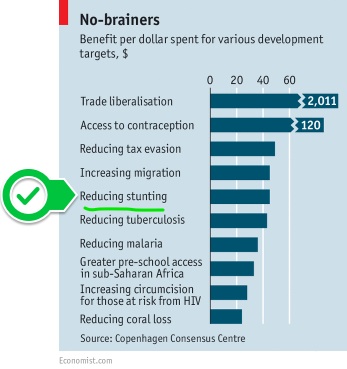 The Copenhagen Consensus Center categorizes the proposed SDG targets into color-coded groupings. “To distinguish among various targets, we use a basic color scheme. We highlight the very best targets in dark green … And we make red those that will cost more than they yield in benefits.”

As of January 23, 2015, the Copenhagen Consensus Center has published 18 research papers on “hunger and malnutrition.” In the most recent perspective paper, Susan Horton of University of Waterloo and John Hoddinott of IFPRI co-author a cost-benefit analysis of nutrition interventions.

Stunting is “an excellent nutrition indicator to include in the SDGs,” write Horton and Hoddinott. Indeed, the stunting receives the coveted dark green color by the Copenhagen Consensus Center, indicating its “phenomenal” cost-benefit ratio.

The authors list 8 advantages and 5 disadvantages to including to stunting in the SDGs. They conclude that stunting is “an excellent measure of the health, diet, and care provided to children during the 1000 days from conception to age two.”

It is good to see that the SDGs are considering an indicator like stunting that addresses chronic undernutrition. However, it seems that Target 2.2 is somewhat convoluted. On the one hand, it proposes ending “all forms of malnutrition,” but it specifies only 2 anthropometric indicators: stunting (low height-for-age) and wasting (low weight-for-height). Target 2.2 does not mention the other forms of malnutrition, specifically obesity/overweight (high weight-for-height) and mirconutrient deficiencies (often referred to as “hidden hunger”). It is also unclear how the SDGs will measure “address [ing] the nutritional needs of adolescent girls, pregnant and lactating women and older persons.” I’d like to see what the Copenhagen Consensus Center writes about these issues, too.